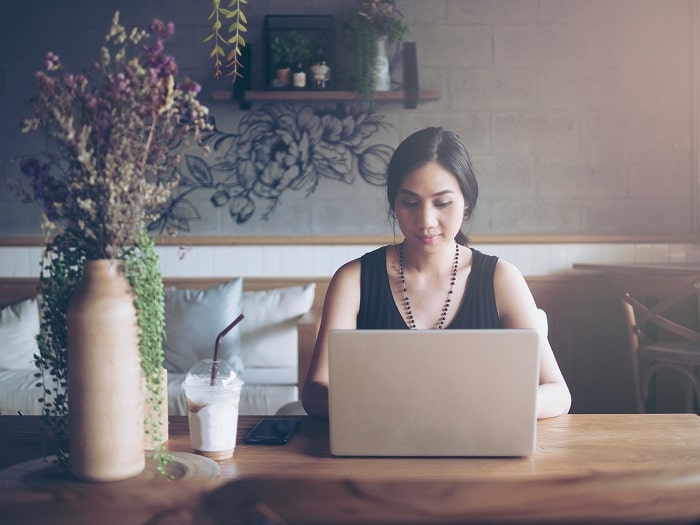 As I prepare for my first session of the day, I settle down at my computer, log on to my Skype account, and review the completed questionnaire emailed to me by a prospective client. The hour ahead will be an initial consultation. It’s early morning in my time zone, late in the evening for him: Because of the time difference between Sydney, Australia, and the east coast of the United States, this was the only hour that worked for both of us.

At 8 o’clock on the dot, I initiate the Skype video call. I can see my client’s face clearly, though the picture is a bit dark. He lives in a shared flat, he tells me, and doesn’t want to disturb his flatmates so late at night, so he is speaking to me from his parked car via iPad. A nearby streetlamp spills light through the windshield, enough to let me read his facial expressions. All in all, it’s a good first session. We connect.

Since I began working by Skype three years ago, I’ve grown accustomed to “meeting” with my clients in various locations. Kitchens, bedrooms, living rooms, basements, private offices, hotel rooms. One session took place in a client’s childhood bedroom when he went home to visit his parents for the High Holy Days. And my new Sydney client was not the first to speak to me from his car. One of my former clients occasionally propped his iPhone on the dashboard and spoke to me while driving long distances from one city to another. Sometimes if he knew cell coverage would be spotty, he’d pull over and finish our session in a parking lot or on the side of the road.

None of this is ideal, of course. No doubt it would be better if my clients and I were able to meet in my office week after week, me inviting them in from my waiting room at the beginning of each session and ushering them out through the exit door at the end. But for people who live in remote locations where qualified professional help is scarce or entirely unavailable, connecting with a therapist by Skype is often the best option. Over the last few years, I’ve worked with an American expat living in Japan, a Ukrainian émigré in Israel, and the scion of a wealthy family in Egypt. I’ve held Skype sessions with people located in remote corners of the United States, England, Australia, and other countries. They had few options for getting the help they needed.

Consider the situation of the American expat in Japan. Given where he lived, he wasn’t able to find a therapist able to understand not only his language, but his cultural values and attitudes as well. Immersed in a foreign culture, expats often struggle to adapt; they may feel anxious, alienated, and depressed. People forced to move when a spouse is transferred to a foreign country, with no job and only the expat community for support, may have an especially hard time. They often search in vain for a local therapist to help, particularly in countries where psychotherapy is undeveloped as a profession.

My colleague Anastasia Gire—a Russian émigré married to a Frenchman and currently living in Madrid—specializes in addressing the particular psychological needs of expats. Fluent in Russian, English, French, and Italian, she works by Skype with a diverse group of clients whose jobs (or their spouses’) carry them far away from their home countries. If you were a Russian speaker married to a Spaniard whose company transferred him to Dubai, what are your chances of finding a compatible in-person therapist?

For some people who choose a distance therapist, convenience is often an issue. Ever since Freud invented talk therapy more than a century ago, driving or taking public transport to your therapist’s office has been a time-consuming part of the experience. You must fight traffic or brave the subway to get there. In order to make sure you don’t arrive late, you need to allow time for unexpected delays. After the session is over, you waste more time traveling home or getting back to work.

With the advent of Skype therapy, clients don’t have to allot more that 45 or 50 minutes for their sessions. I’ve worked with a number of busy professionals living in New York, Zurich, and London where there is no shortage of qualified therapists. All of these clients came to me after following my blog, After Psychotherapy, but convenience probably factored into their decisions, too. Many of them also travel as part of their job; in the pre-Internet days, this would have meant lots of missed sessions. Now they take me along on their business trips.

The legality of Skype therapy is a gray area because most state laws require the professional to hold a license in the state where the client resides. Because I was trained as a psychoanalyst, and psychoanalysis is not a regulated profession in most states, I skirt such licensing laws by offering my services in that capacity.  Some therapists call themselves “life coaches” when they work across state lines; others simply ignore the law. The arrival of distance therapy and telemedicine is rapidly rendering state-by-state licensure impractical. As usual, the law lags far behind technical innovation.

With the impending arrival of Oculus Rift, Facebook’s virtual-reality headset, we might be on the verge of a yet another new age for distance therapy. While video gaming will of course be the major investment focus for this technology, maybe one day the engineers at Skype will update their platform to incorporate it, crafting a program that allows me to enter a shared space with a new psychotherapy client. At the appointed hour we will don our virtual reality headsets and greet each other, convinced by this amazing new device that we’re actually face-to-face in the same room. I might even be able to invite him in from a virtual waiting room at the beginning of the session and show him out through an “exit door” at the end.

This month we would like to recognize Gianna Lishman for her exemplary service to the YDI mission and the youth and families we serve in the Helena area. Gianna goes above and beyond on a daily basis to make a difference in the lives of vulnerable youth.

This is what leadership and Gianna's teammates had to say in recognition of her:

"Gianna is a model of our mission. She continually goes above and beyond to support the children and families we serve. Her actively caring nature is evident every day. She has modified and accepted assignments not of the ordinary. Her willingness to work with the children of the Lewis and Clark group home is a typical example of her attitude of service over self. Gianna, thank you for all that you do for the children of Youth Dynamics." - Dennis Sulser, Chief Administrative Officer

"Gianna has been a great asset to our Youth Dynamics family and contributing to our mission! She has been willing to help out wherever needed, including seeing our LCYH clients for therapy while also maintaining her current outpatient caseload. Gianna has approached these extra duties with grace, passion, and positivity! Her solution focused, trauma informed approach has been extremely beneficial in assisting clients and staff in treatment interventions. I have really enjoyed getting to work so closely with Gianna over the past 6-8 months and appreciate her willingness to go above and beyond to provide the best care possible!" - Jordan Hinshaw, Associate Clinical Director

"She goes above and beyond for our community side kids as well as taking on the Lewis and Clark Group Home. She actively works to better support all of her clients and advocate for their needs. Gianna consistently works to better her own self as a therapist, participating in classes, conferences, and research. She actively seeks information through supervision and colleagues in order to best provide for the kiddos. I greatly enjoy working with Gianna." - Kelsey Harriman, Area Manager

"She has been nothing short of an amazing mentor and team member. She has helped me understand all sides of our kiddos, triggers, and interventions. She is doing her full-time job as the community therapist as well as a full-time job as the Lewis and Clark group home therapist. The kids are her top priority. She also runs our foster parents support group, and ensures parents are included in kid's care to translate the skills and knowledge learned at home." - Hayley Blevins, Care Manager

"Not only does Gianna do an amazing job of making her clients feel heard and seen, she also goes above and beyond to research activities and techniques that can help them process their trauma. Her dedication to always learning and doing more for her clients makes her an indispensable part of the Helena Community Office. We are so lucky to have her here!" - Bree Caldwell, Helena Administrative Support

"Gianna is a fantastic addition to YDI! She has gone above and beyond with offering to help out at Lewis and Clark and has been doing an amazing job there. She is a hard worker and extremely dedicated to the youth she is working with. She is very kind and just an amazing therapist!" Congratulations on the Spotlight Gianna!" - Mandy Haller-Doris, Program Manager

"Gianna is an AMAZING therapist. She is not only the Helena community therapist, but she is also helping with the Lewis & Clark group home kid's therapy. She does an amazing job, is always willing to help, and goes above and beyond for the youth that she works with. We are so lucky to have Gianna as a part of not only the Helena Community Office team, but also as a YDI employee." - Stephanie McLane, HR Assistant

Gianna's dedication, hard work, and positive attitude are apparent through feedback from people throughout our organization. Thank you, Gianna, for everything you do. You clearly have an amazing presence at Youth Dynamics. Your dedication to our agency, our mission, and the children we serve is truly special. We are honored to have you as part of our YDI family.
... See MoreSee Less

"New research is shedding light on the importance of helping young children, especially boys, learn how to cope with their powerful emotions. Researchers at the University of Illinois investigated how parents reacted to their toddlers’ negative emotions (e.g., anger and social fearfulness). Two possible parental reactions that were examined included:

2. punishing the child for their emotional outburst (e.g., sent to room or having a toy taken away)

The results indicated a clear association between parents punishing their child for their emotions and a greater chance of the child being withdrawn or anxious at a later time point. Perhaps most importantly, this finding was stronger for little boys, especially those who experience more frequent negative emotions.

Researchers point out that when parents punish children for negative feelings, they soon learn to hide their emotions and can become withdrawn or anxious. In other words, punishing big emotions doesn’t do anything to actually help toddlers’ emotional development." ... See MoreSee Less

“Puddle parents,” on the other hand, let their kids veer off the regular, prescribed path and forge their own way.

We need more puddle parents in this world.

Puddle parents, instead, let their children choose their own paths.

That means a lot of different things to families. What makes one puddle parent might not make another." ... See MoreSee Less