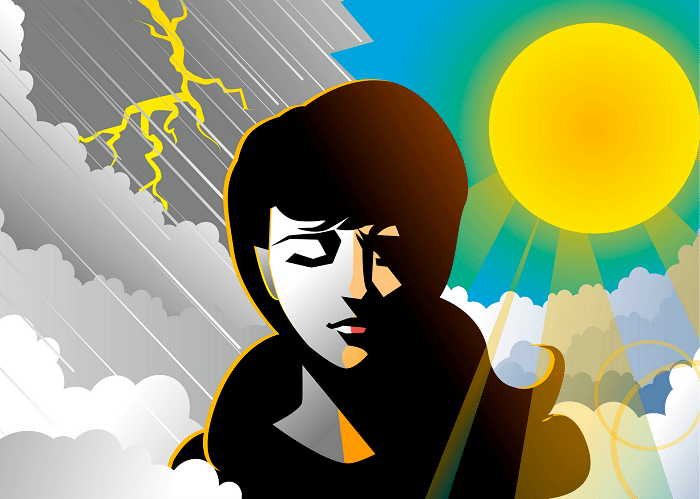 Did you know that May is Mental Health Awareness Month? It’s true! And to celebrate, we’re exploring different topics to bust stigma and spread awareness. And this week? We’re taking a closer look at bipolar disorder, a condition that affects 46 million people across the globe.

Often referred to as manic-depression, bipolar disorder is characterized by prolonged periods of marked “highs” followed by depressive “lows.” It affects people across the lifespan, but most often appears in early adulthood, around the age of twenty-five.

That said, those who struggle with it face significant stigma. However, while disabling, the disorder is also associated with a host of unique strengths. In fact, everyone from Ludwig van Beethoven to Vincent van Gogh, Isaac Newton, and even Ted Turner grappled with the condition.

So, what exactly is bipolar disorder? There’s a lot to it! First, there are different variations of the condition, and all are characterized by a series of manic and depressive episodes that vary in degree. Below are the symptoms of these episodes.

Mania and hypomania are distinct but have the same symptoms. However, mania is more severe than hypomania and causes an increase in noticeable problems. And in extreme cases, it may also trigger a break from reality (psychosis) and require hospitalization.

Both a manic and hypomanic episode include three or more of the following symptoms:

A major depressive episode includes severe enough symptoms to cause difficulty in day-to-day activities and contains five or more of the following symptoms:

Moreover, there are four different subtypes of bipolar disorder, including:

Bipolar I: An illness in which people have experienced one or more episodes of mania. Most people diagnosed with this will have episodes of both mania and depression, though a bout of depression is not necessary for a diagnosis. More so, manic episodes must last at least seven days or be so severe that hospitalization is required.

Bipolar II: A subset of bipolar disorder in which people experience depressive episodes, shifting back and forth with hypomanic episodes, but never experience full-blown mania.

Cyclothymic Disorder or Cyclothymia: A chronically unstable mood state in which people experience hypomania and mild depression for at least two years. People with cyclothymia may have brief periods of normal mood, but these periods last less than eight weeks.

Bipolar, “other specified,” and “unspecified”: This is when a person does not meet the criteria for bipolar I, II, or cyclothymia but has still experienced periods of clinically significant abnormal mood elevation.

Did we pique your interest? If so, click here to learn more about the disorder and treatment options via Mental Health America.

If you enjoyed this article, check out the rest of our blog today and make sure to follow us on social media. You can find us at youthdynamicsmt on Instagram, or Youth Dynamics of Montana and People of Youth Dynamics on Facebook.