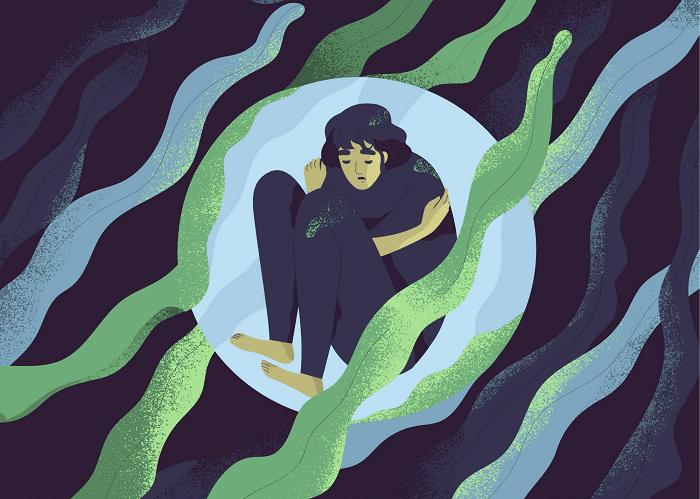 Have you ever felt like there was a weight on you? Like you’re drowning? Like you’re stuck in a hole with muddy walls, and the harder you fight to climb out, the further entrenched you get?

Depression is a tricky bugger; it can blindside you. For many, it’s brought on by a sudden or traumatic event. Perhaps you went through a divorce, experienced the death of someone close to you, or lost your job? For others, life’s natural ebb and flows can bring it on. Maybe you recently had a baby, decided to retire, or relocated?

At its core, depression is a chemical imbalance in the brain. It’s something we can’t necessarily physically see when we look at someone, but none the less is a very real thing. In fact, feelings of sadness, or even clinical depression, can be expressed in ways that wouldn’t necessarily be recognized by others.

What do you think of as the archetypal embodiment of depression? Many of us think of Eeyore from Winnie the Pooh. Eeyore spoke in a sad tone and always seemed to be self-loathing. While he’s absolutely an excellent example of what depression looks like, it can have many faces.

Feeling blue can shine through as pessimism, anger, anxiety, irritability, and self-isolation. And, don’t forget that many people who struggle with depression, or regular bouts of sadness, can mask these feelings completely, making it all the more important to be vigilant of how we interact with others.

Right now, many of us have potentially experienced a large magnitude of sudden changes. Our routines have changed, our careers have shifted, and we are grappling with an unprecedented level of uncertainty in our world. It’s the perfect storm, so to speak, for a bout of gloom.

But, sadness doesn’t have to cripple you. You don’t have to bury yourself into a hole of depression.

Of course, this is easier said than done. We don’t want to dismiss how hard it really is to climb out of that hole, to do even the most mundane of tasks when you’re struggling. The truth is, depression creates this myopic view of the world for those who suffer from it. Everything is dark, and it’s hard to see the light at the end of the tunnel.

Climbing out of that hole takes hard work. It means doing things when every bone in your body tells you no, that you can’t. It means arguing with the voices in your head that tell you aren’t good enough, that things won’t be okay, that you are somehow of less value than others.

We like to think that one can just pop a pill and snap out of that funk, but that couldn’t be further from the truth. Combating severe sadness that has entrenched itself into depression takes commitment.

So, without further ado, we would like to offer a few tips for those who are struggling with how to fight the blues.

How many times have you heard it? Try exercise, go for a walk, hit the gym! Okay, we know it’s cliche, but seriously, exercise can make a huge difference. Like anything else you try, it may not be your cure-all overnight, but even in the short-run, it can make a difference. Exercise helps reduce stress and raises your endorphins, resulting in the epic “runner’s high”. In the long-term, regular exercise can actually change your brain chemistry by increasing the happy hormones, dopamine, and serotonin.

While it might seem daunting at first, once you get in the habit of exercise, it can be quite addicting. We know you can’t exactly head on over to the gym right now, but you can still pop in an exercise video, go for a hike, or even a brisk walk.

So, what are you waiting for? Strap on those athletic shoes and get moving!

Have You Gotten Your Daily Dose of Vitamin D?

Did you know that a lack of vitamin D is correlated with a whole host of problems, including depression? Luckily, with the help of sunshine, our bodies can make all the vitamin D we need. However, homebodies and those who live in areas with shorter days in the winter months often don’t get enough.

If you aren’t getting enough sunshine and/or vitamin D from a wholesome, nutritious diet, you may need to supplement it. But, be careful if you do choose to do so. Unlike water-soluble vitamins, you can easily reach your upper limit of vitamin D- a potentially dangerous situation. A safe intake of vitamin D is between 1000 and 4000 IUs per day.

But, you know what will make you feel even better than popping that supplement? Strap on some shoes, get out of your box and into the sunshine! It may be blinding at first, especially if you are one of those people who like to stay in your hobbit hole. But, resist the urge to stay in and venture into the great outdoors! Trust me, your mental health will thank you!

Oh man, this can be hard when you’re struggling! Especially if you have nowhere to go and you’re experiencing a drain to your motivation. It’s so important, though! There is a real connection between the way we look and feel. For example, experts have long touted the relationship between the way we dress, our behavior, and how we interact with others.

So often, the first thing to go when people fall into a funk is self-care. After all, it gets hard to do everything. Sometimes, just taking a shower can feel like an epic trip up Mount Everest. But, let me tell you it’s worth the climb! Drag yourself out of bed, into the shower, and get some pants on to start your day with a bang!

Make Plans & Stick to Them!

Planning for the future is no easy feat when you’re struggling. After all, it’s hard to even see past the day, let alone to tomorrow. Add to that the fact that you probably just aren’t in a space where you even want to leave the house, let alone interact with others.

But that’s why it’s so important! Depression is like a thick blanket of despair that weighs you down. It traps you in your own personal hell- a schema of negativity that you can’t easily break free from. Making plans forces you to see past tomorrow; it forces you out of your box.

Once plans are made, you might be tempted to cancel when it’s time to carry them out. However, I challenge you to be strong and stick to them. You will most certainly thank yourself for doing so later.

Get Connected… Even When You Don’t Want To

When you’re in a rut, being around others can be hard. In fact, just socializing with a coworker or family member can be utterly exhausting. Naturally, you’ll probably be tempted to withdraw from others, but that’s a mistake!

Social connection is a huge factor in overcoming depression. After all, you could try to dig yourself out of this hole alone, or you could allow someone to give you a hand and help pull you out.

So, what are you waiting for? Answer that phone call and follow through with those plans! If you’re struggling, reach out to a friend, family member, or even get connected with a mental health counselor! We know it’s hard, but so is depression. Even though you may feel like you’re in this alone- that it’s your burden to bare- it’s not. There are so many people out there who care and want to help.

If you’re really struggling and you can’t see a way out, there are hotlines out there to help. The National Suicide Prevention Lifeline can be reached toll free at 1-800-273-8255.

Are you looking for more tips to guide you on your path to a happy and healthy life? Check out the rest of our blog, and don’t forget to follow us on social media. We can be found at youthdynamicsmt on Instagram, and People of Youth Dynamics and Youth Dynamics of Montana on Facebook.

Youth Dynamics of Montana10 hours ago
Such wise words! 😌

Youth Dynamics of Montana1 day ago
In the aftermath of his brother's suicide and his mother's battle with cancer, Dallas Cowboys star quarterback Dak Prescott was candid about his own bout with anxiety and depression, while urging others to talk openly about an often difficult topic.

Cowboys QB Dak Prescott talks openly on mental health
In the aftermath of his brother's suicide and his mother's battle with cancer, star quarterback Dak Prescott was candid about his own bout with anxiety and depression, while urging others to talk openly about an often difficult topic.
nfl.com
20    View on Facebook